Stacy Castiglione - Director
﻿Stacy Castiglione is the theatre director for Los Alamitos Drama Department.  In addition, she serves as the Performing Arts Chair for Los Al, and serves on the board for CA State Thespians.
Stacy grew up in Singapore, which allowed her to perform in theaters all over the world.  She received her Bachelor's degree in Theatre from Florida State University, where she studied under Lloyd Richards, John Degan, Michael Richey, and George Judy.  She received her Master's in Theatre Production and Design from Southern Oregon University.
Stacy spent years as a professional performer on both stage and screen before finding her way into educational theatre.  She performed in London's Off-West End in the BAC's production of The King and I, as well as working for the Shaftesbury Theater during the musical RENT's tenure.  She has toured the U.S. with the musical Babes in Toyland, worked the dinner theatre circuit in Orlando, and has performed on many L.A. area stages, as well as learning the ins and outs of film and television by working background as her day job.  She's been on the set of shows ranging from E.R., Gilmore Girls, and MadTV, to movies such as Big Fat Liar and  Van Wilder.
Since teaching theatre for the past eighteen years, Stacy has been named Teacher of the Year for the Orange Unified School District, Secondary Theatre Teacher of the Year by the Orange County Arts Administrators, Orange County Arts Administrators Outstanding Theatre Teacher of the Year, PTSA Teacher of the Year twice, and has coached her students into top honors at the CA State Thespian Festival as well as acceptance into top university theatre programs, in addition to directing and producing up to seven full-scale shows a year.
She lives in Orange County with her husband (a film and television animal trainer turned high-school science teacher), her two children, and an array of pets.﻿ 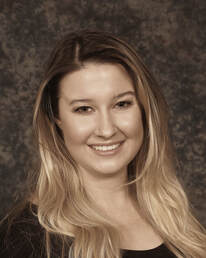 Kimberly Federoff - Musical Director
Kimberly Federoff is very excited to be joining the Los Alamitos production team as Musical Director for the 2022 spring musical. In addition, she owns her own business as a private voice teacher/coach, called Kimberly Federoff’s Voice Studio (K.F.V.S.), and has been a resident musical director for MYART Theatre Company in Orange Country for the last few years. Kimberly is also a professional vocalist and performer in Southern California. She is a lead vocalist in several bands: The Gem City Jazz Cats Big Band, Lemon Twist, Vested Interest and the Jazz Lite Octette. She is blessed to use her talents as a worship leader for One Hope at FBTC Church, in Temple City and at several other churches in the San Gabriel Valley area. She recently switched gears, directing her first musical for One Hope’s children’s ministry, and thoroughly enjoyed it.
Kimberly grew up in Monrovia, California and started performing in musical theatre when she was 8 years old. She continued pursuing theatre with Centre Stage Inc., a theatre company based out of Monrovia, from Middle School through College. She was part of the Citrus College Singers Program at Citrus College, performing 65 concerts per year during the Christmas season at all the major country clubs in SoCal and going on several choral and pop tours to New York, Scandinavia, and Hawaii.
She received her Bachelor of Fine Arts degree in Musical Theatre from AMDA College and Conservatory of the Performing Arts, attending both the Los Angeles and New York campus. She has performed at various theaters in Southern California, such as the Candlelight Pavilion, La Mirada Theatre for the Performing Arts, Class Act Musical Theatre and occasionally will step on the stage at MYART as well. Her latest roles were Paulette in Legally Blonde and The Mother in A Christmas Story. Although Kimberly loves performing, she has found much joy in teaching and directing over the years and looks forward to mentoring her students in their musical journeys. Kimberly resides in Duarte, Ca with her family, dog Lady and the newest member, kitten Sweet Pea. 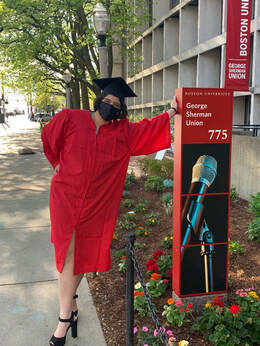 ​Angelica is a Los Alamitos High School Drama Alumni. She went on to earn her Bachelors of Fine Arts from Boston University. She majored in theatre arts design and production with an emphasis in Sound Design. Since graduating she has worked at various theaters as an audio engineer including the Kirk Douglas Theatre, The Aratani, and South Coast Repertory. She is excited to be back where she started helping the next generation of theatre artists.
Follow us on Instagram: @losaldrama