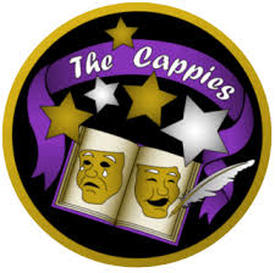 The Orange County Cappies
is a student critics program.  Our school's team sees high school shows at other Orange County schools who are also Cappies schools.  Critics write a review of the show they see and submit it for potential publication in the Orange County Register.  At the end of the school year, critics vote on their favorite shows, and a huge Tony-style awards ceremony.  Below is an excerpt from the Cappies website.  Applications for additions to the Cappies team will be available at the beginning of the school year.

A YEAR IN THE LIFE OF CAPPIES SCHOOLS...BY ADAM CAMPBELL
In the fall, each school forms a team of 3 to 9 student critics and 2 adult volunteers. The school designates one of its shows to be the Cappies show to be attended and reviewed by the critics.

In the fall, each school forms a team of 3 to 9 student critics and 2 adult volunteers. The school designates one of its shows to be the Cappies show to be attended and reviewed by the critics.

Critics and adult volunteers/mentors are trained and a schedule is created through CIS of which critic teams and mentors will attend which shows. Shows may have between 20 and 90 critics in attendance.

On the night of the Cappies show, the critic teams and mentors gather in a special area at the host school (closed to the public) to discuss the performance before, during intermission and after the play.

Both technical and performance aspects of the show are discussed. The performing school is required to document the technical categories (props, costumes, lights, sound, make-up, marketing and publicity, sets, etc.) to show the work and project development. For a category to be considered by the critics for an award, the work must be done by the students.

Within 48 to 72 hours after the show the critics submit (through CIS) a 300 to 600 word review of the show. The adult mentors and program director select the best written reviews to be sent to local press outlets. All the reviews are also sent back to the performing school.

At the end of the year the critics gather via central computer labs, using CIS to determine which schools and students should be recognized for excellence in each Cappies performance and technical category. The voting system in CIS uses a mathematical scoring formula that is based on critic averages in each area. The vote is not determined by the number of shows a critic saw or the number of critics at any one show.

Before the nominations are announced an independent audit of the voting results in each category must be completed.
At a Tonys-like celebration, all nominated shows perform a cutting or the critics' choice song, and the final Cappies awards are presented. Student escorts bring the presenters (elected officials, school superintendents, and Cappies alums) to give the Cappies trophy to the peer- chosen recipients, filling the venue with cheers and supportive applause.